This year php[tek] was in St. Louis, an easy four and a half hour drive from Memphis. Since I didn't have to fly to the conference I stocked up on a lot of local Memphis beer to share with my fellow PHP beer connoisseurs. Originally, my awesome wife Kara was going to join me, however, it didn't work out.

Because I was giving a day long Laravel training on Monday and wanted some time to settle in beforehand, I left for St. Louis early Sunday morning. After arriving at the hotel, I went to find lunch at the nearby taco place. Someone at the bar asked, "Hey, want a brewski?" The answer is always yes. I ended up joining the php[architect] crew for lunch, then settled in across the street at the O’Fallon brewery. Conference venue across the street from a brewery? It's like Eli chose this venue just for me. After a flight (or two) I saw a fellow trainer Chris Cornutt arriving and he joined me. I've met Chris at several conferences and it's always great to catch up with him. Later, I caught up with Eli and the other organizers and volunteers and did what I could to help run power strips to a few of the rooms. We all ended up having dinner together at the hotel restaurant. 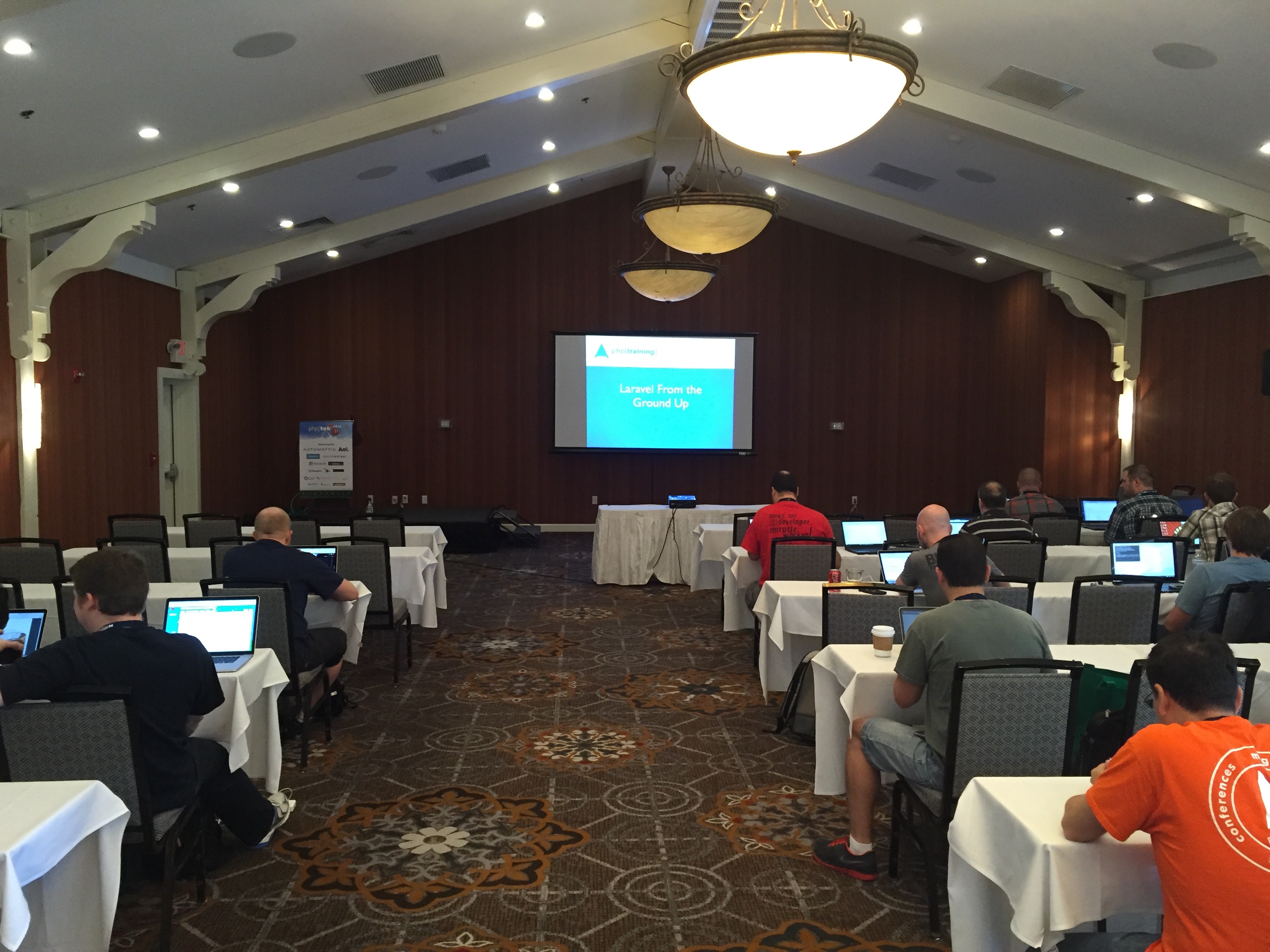 Training day went really well. We had about 23 attendees and around 20 of them were totally new to the Laravel framework. I'm proud to say the Laravel training outsold the Security training session by 1 or 2 attendees. A point of pride for me since I started giving this training at php[tek] 2015. The attendees picked up the framework really quickly and many learned a lot about Vagrant and local development environments as everyone was using Homestead to follow along with the exercises. After the training, I joined a group at the nearest bar and restaurant, Train Wreck, for dinner. Train Wreck has great burgers and a great beer selection. I had a wonderful evening catching up with friends who had arrived that day. 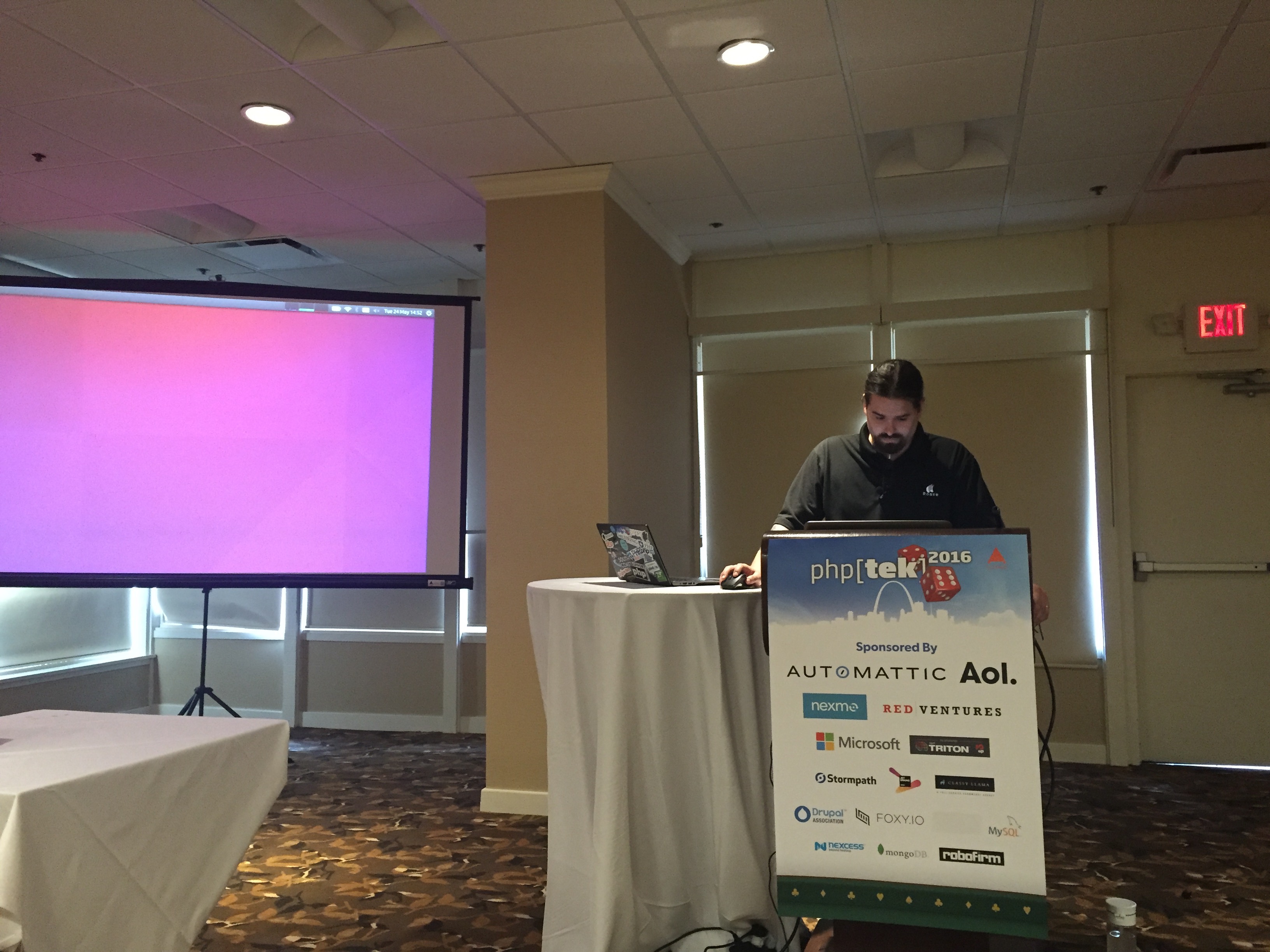 The next day was Tutorial Day, the second day of the conference before the primary conference starts, and it was an "off" day for me. I wasn't speaking and it was a recovery day for my voice after the day long training. I attended James Titcumb‘s tutorial on RabbitMQ and I learned a TON. James is a great speaker and did a wonderful job with his tutorial. At lunch, I got to meet up with other friends who had arrived for the conference. I opted to not attend an afternoon tutorial session in favor of checking in on work things and catching up on local tech event planning happening back at home. That evening I found myself back at Train Wreck with more friends. Train Wreck is a good replacement for Shoeless Joe's, in Chicago. Maybe O'Fallon, but Train Wreck felt more like Shoeless. 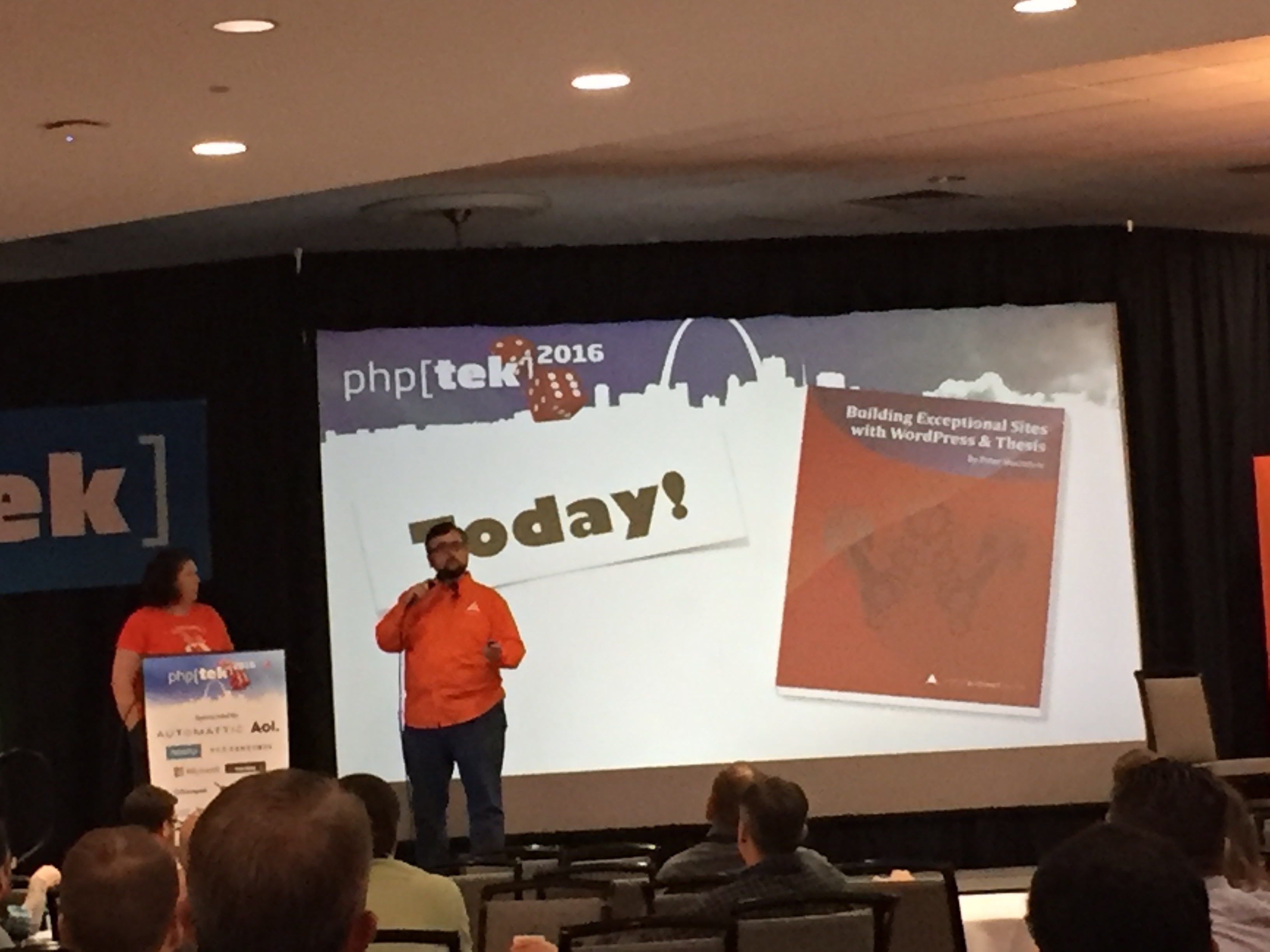 The first day of the conference was finally here. I got up early and made it to breakfast so I could get a good seat in the main room for Jeremy Mikola‘s keynote "I'm Just Here for the Elephpants." Jeremy's keynote was great. I really enjoyed it. He seemed nervous and I Don't blame him a bit. He got some rough feedback on his keynote and I understand. I just hate to see it because I know how terrifying it can be to get up in front of a lot of people, not to mention on the main stage giving a keynote. Jeremy did a solid job and talked a lot about the PHP community. He talked about the importance of documenting events so people in ten years can look back on blogs, Flickr albums, and other places to see what the community was like. The talk really hit home with me as I'm always trying to pay the community forward to the next generation of PHP developers coming into the community.

I stuck around for Katie McLaughlin‘s talk "Build a Better Hat Rack: All Contributions Welcome." Katie is a great speaker and I enjoyed her talk about counting all project contributors, not just people who have their pull requests accepted. I sat in on the "hallway track" the next talk slot to catch up with friends, and plan an Open Spaces talk (similar to Uncon talk) about PHP User Groups and community organizing. Michelangelo van Dam did this for php[tek] 2014 and it was incredible to be able to collaborate with other user group leaders in the same room, at the same time. Since I knew Michelangelo would not be present this year, Chris Spruck, Bill Condo, and I made sure it happened this year. I spent the rest of the day in the hallway track catching up with friends and making new ones. I got to meet a Vector Media Group coworker Rob Sanchez in person for the first time. Always great to meet coworkers, especially at a conference! 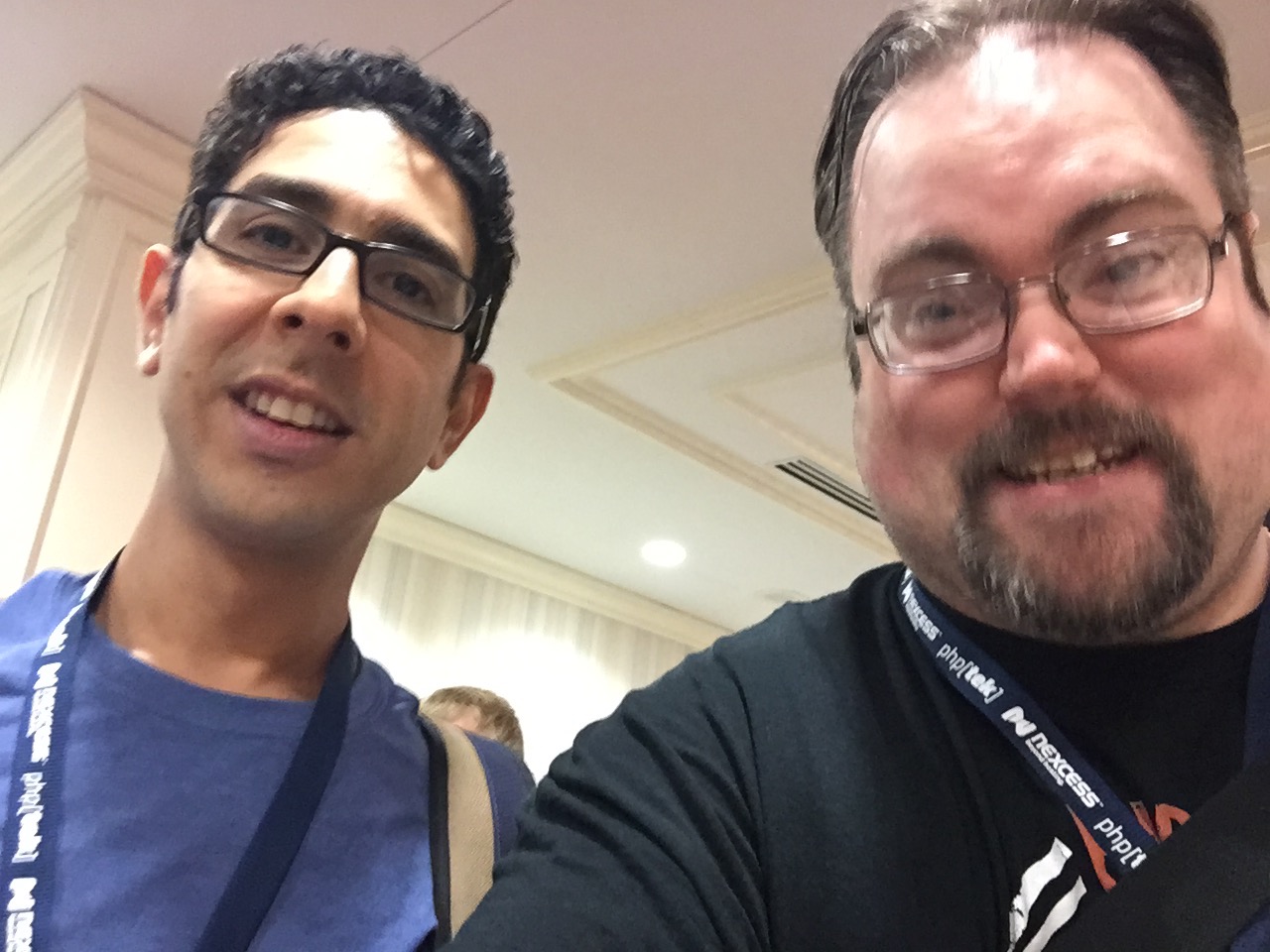 The conference event after the first day was a Casino Night. Speakers were asked to sign up for time slots to be dealers for the casino games. The selection of games included Blackjack, Poker, and Roulette. There was also board games for those not interested in the casino games. I signed up to be a blackjack dealer. Although I lost all of the casino's fake money and was generally terrible at remembering who's hand had lost and who's had won, I had a blast! After my time slot was up I ended up playing a few hands.

Conference day two was another early morning for me so I could get a good seat for Samantha Quiñones‘ keynote, "The New Revolution." She absolutely killed it. I enjoyed the talk immensely. The talk was about how far technology and the internet has come in our lifetime and how much it will change and improve for future generations. Right after the keynote, I sat in for Colin O’Dell‘s talk "Hacking Your Way to Better Security." Colin is a great speaker and he did an excellent job explaining some rather complex security concepts in a way I felt even novice developers were able to take away a lot of value from the talk. 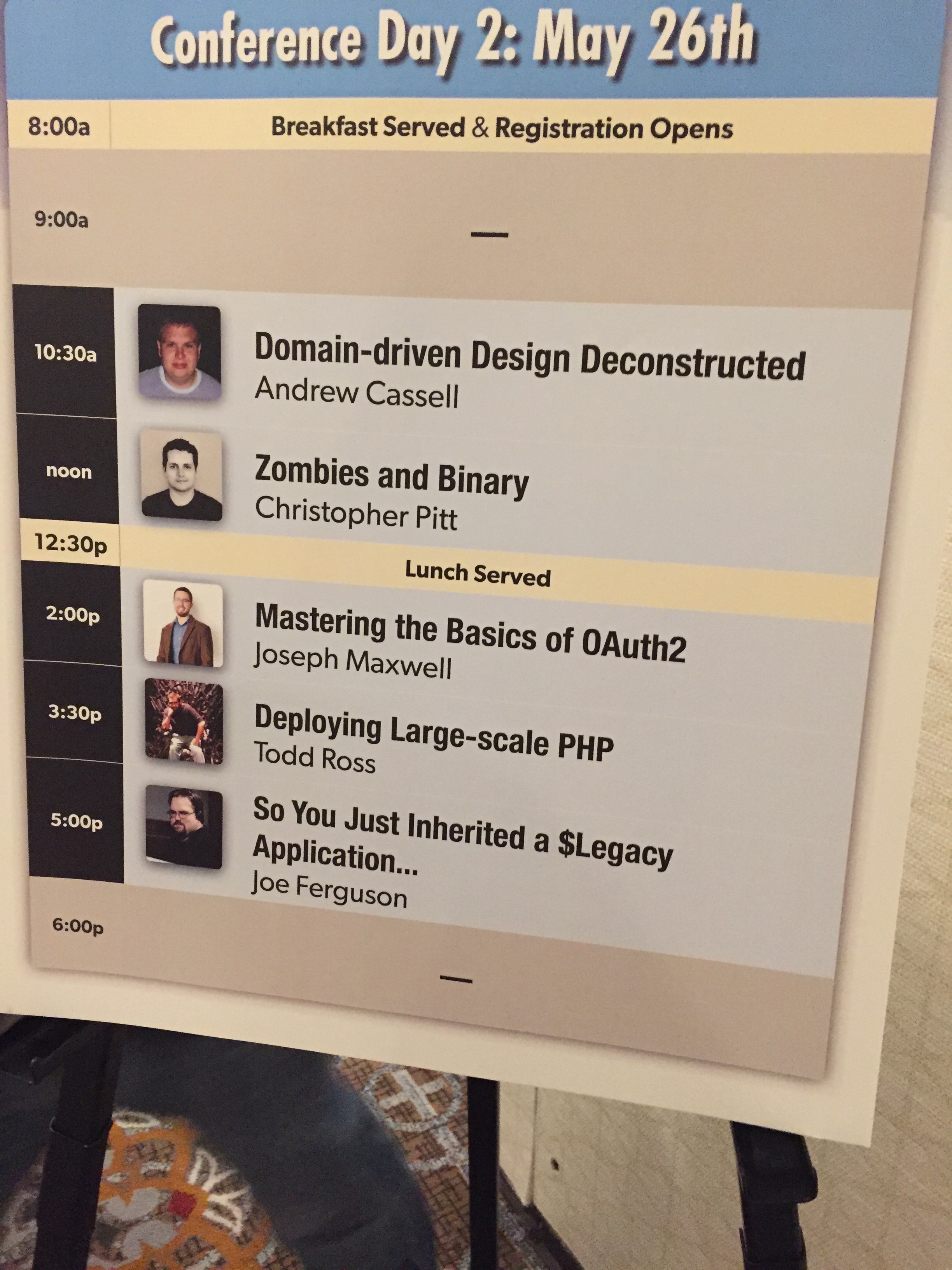 I ended up skipping the next two talk slots because I was really nervous about giving my talk "So You Just Inherited a $Legacy Application..." I was supposed to give the talk at my local user group the previous week but was unable to attend. This was the first time I had given the talk and I felt like I really nailed the delivery. The audience gave me some quality feedback and I was very happy with the result. It was also somewhat intimidating to give the talk in a nearly full room, with coworkers, current and future in attendance (first row even!) as well as several friends and developers I greatly respect. Seeing peers I have such admiration and respect for come to my talk is a very humbling feeling for me. 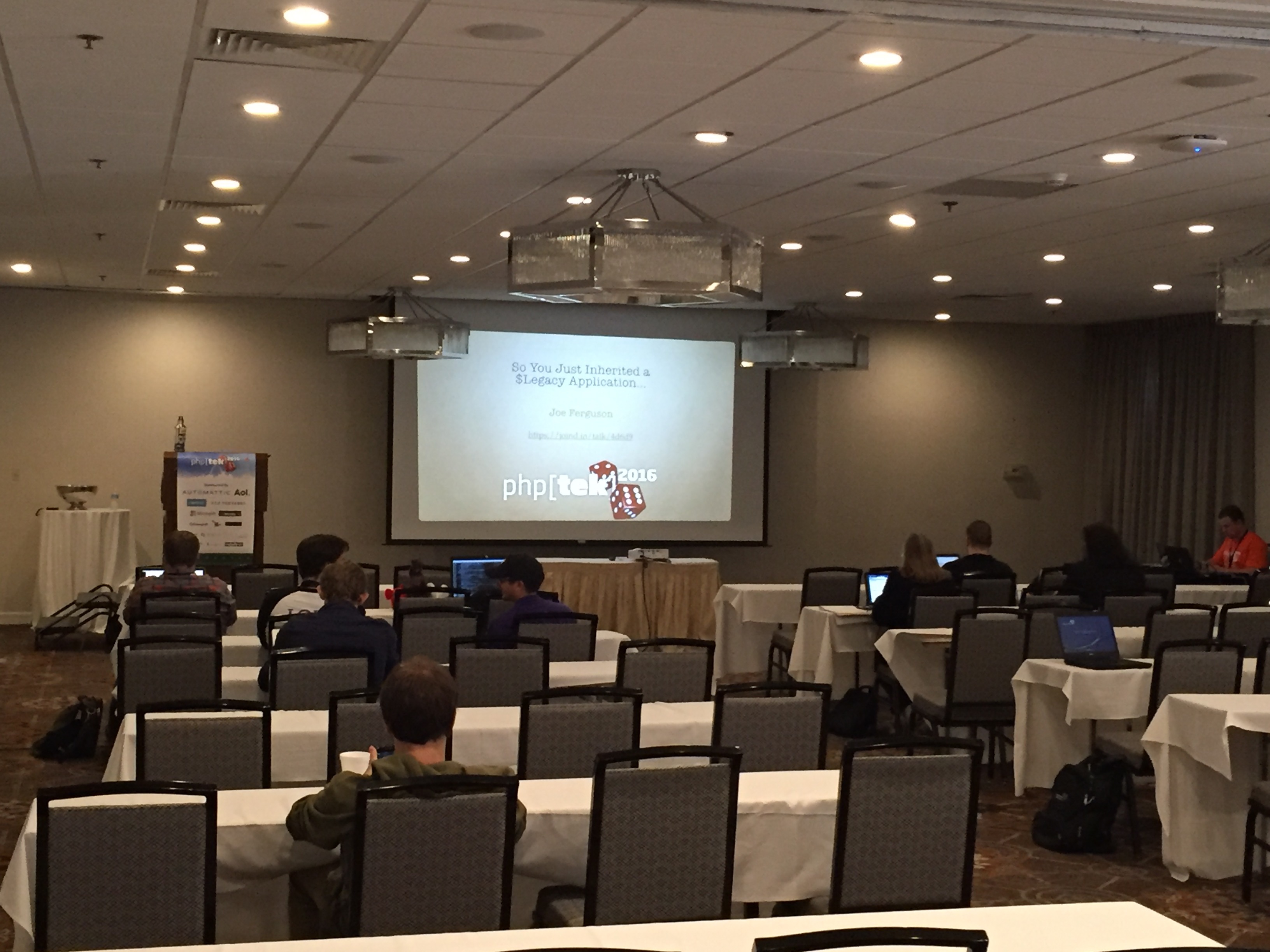 Right after my talk was the community night reception and I joined the on-stage recording of the PHP Roundtable Podcast. Sammy K. Powers is a great developer and a friend and it was great to be invited to talk about PHP FIG on the podcast. After the PHP Roundtable recording, several of us went right into the first (as far as I know) PHP Beer tasting at a conference. We pooled all the beer Ben Ramsey, Chris Spruck, and I brought and invited an audience to record an episode of Voices of the Elephpant: It's the Booze Talking. Let's just say we invited too many people, had too many beers, and the episode will probably never see the light of day. Lesson learned: smaller audience and fewer beers next time.

After a late night and sleeping in, conference day three started out with me attending Matthew Turland‘s "What Makes a Great Developer?" talk. Matthew did a great job and covered lots of great quotes by developers to give solid insight into what makes a great developer. I highly recommend seeing this talk if you have the opportunity. The text talk I attended was Adam Harvey‘s "phpdbg for Fun and Profit." I really enjoyed seeing Adam demo debugging an application with phpdbg. I had read some about phpdbg but the talk was a great primer on seeing it in action. 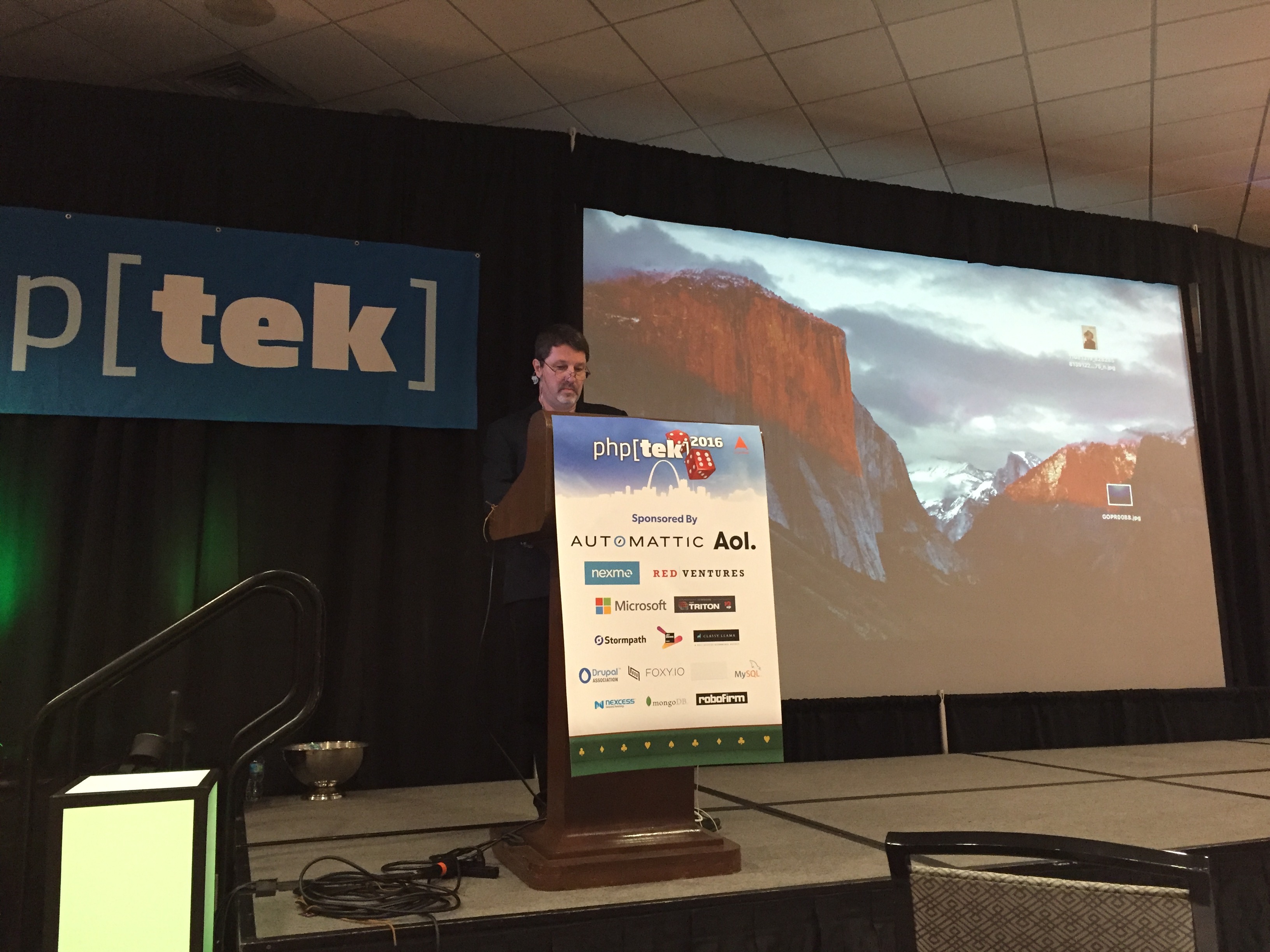 The closing keynote was my good friend Cal Evans giving a brand new talk "Uncle Cal's Career Advice for Developers." This is a talk every single developer needs to see. There are parts you may not like, or even agree with, but it is solid, next level career advice applicable to all developers. I'm really glad there is someone like Cal in the PHP community giving these talks. we're a better community because of it.

Thanks to all the speakers, sponsors, attendees, and organizers which made php[tek] 2016 happen. I truly felt like it was a homecoming. We have this amazing community and I'm glad I'm a part of it. I'm always trying to bring a little bit of that community feeling back to my local user group and local tech community. This year was one we're going to be talking about for years to come. I hope all the first timers had the same experience and I hope the attendees take the community feeling back home with them.